Board of Directors Recommends a Cash Dividend of QAR 2.5 Per Share

•Most of Ooredoo’s operations delivered a solid performance in 2018. However, group results were significantly impacted by the market situation in Indonesia following the new SIM card registration regulation, challenging market conditions in Algeria and the overall Foreign Exchange weakness in Emerging Markets

•2018 Revenue was QAR 29.9 billion, driven by strong contributions from Oman and Kuwait. Group Revenue before the FX impact decreased by 6%, while reported Revenue decreased by 8% year-on-year.Q4 2018 included an adjustment of previous quarters related to the impact of IFRS 15 (a new financial reporting standard on revenue recognition). Excluding this impact Q4 Revenue declined by 9% instead of the reported 12%.

•Group Net Profit attributable to Ooredoo shareholders was QAR 1.6 billion. The positive performances in Iraq, Oman, Kuwait and Tunisia were offset by market challenges and lower revenues in Indonesia and Algeria. In Q4 Net Profit improved by 40% compared to Q4 2017 mainly due to lower tax, regulatory provisions and Foreign Exchange gains in Q4 2018

The Board of Directors proposed a cash dividend of QAR 2.5 per share for 2018

•Ooredoo made further progress on its digitisation strategy. In Qatar, Ooredoo launched the world’s first commercially available 5G network in the world, while in Maldives, Ooredoo tested the country’s first VoLTE network

•Ooredoo Algeria achieved the highest 4G coverage in the country reaching 48% of the population and all 48 wilayas. In Indonesia, Ooredoo launched 4G plus in its 4th province.  In Maldives, Ooredoo launched its “SuperNet” service in 11 new islands, now covering a total of 20 islands

•Ooredoo Myanmar was the most recommended brand by users and retained the number one position in the NPS scores, while also increasing its customer market share

•Wataniya Mobile was successfully rebranded to Ooredoo Palestine, enabling it to benefit from group derived synergies, leading to improvements in Ooredoo Palestine’s commercial and technical operations.

•On January 8, 2019 the Telecommunications Regulatory Authority in Oman approved the renewal of Ooredoo Oman’s First Class Mobile License. The renewed license will be valid for 15 years, starting from February 2020 for a renewal fee of OMR 75 million to be paid in two installments in 2020 and 2021.

“Across emerging markets, new digital technologies offer the chance for people and businesses to achieve their full potential and realise new opportunities. Through our robust and clear strategy, Ooredoo is well-positioned to support the introduction and sustain the development of these new technologies across all our markets, as demonstrated through our business results for 2018.

We launched ‘My Ooredoo’ app in several markets ushering in a new standard in flexibility and consumer interaction. In Myanmar, customers in rural areas can now obtain easy access to weather, crops and wholesale crop prices, which is making their lives much easier.

We continued to invest in the infrastructure required to power our digital revolution. In Qatar we launched the first commercially available 5G network in the world and became the first telecom operator to test self-driving 5G connected aerial taxis. In Oman we launched pre-5G with a major home broadband enrichment programme. In Algeria we led the mobile data market by being the first and only operator to cover all 48 wilayas and 48% of the population with 4G technology, while in Oman our ‘Supernet’ now covers over 95% of the Sultanate’s population, providing better streaming, surfing, sharing and chatting to our customers.

We expanded our B2B business to new areas, leveraging Ooredoo’s market leading capabilities in ICT. In Kuwait, we were chosen to provide Boursa Kuwait with disaster recovery services at its data centre and in Indonesia we developed a smart cities initiative to manage public services, which was recognized as the most innovative smart city project by Telecom Asia in 2018.

Traditional telecom services remain under pressure, in line with regional and global trends for our industry, and our financial results for the period reflect these challenges. However, I am pleased to report good growth in terms of EBITDA  across the majority of our markets. For our shareholders we continue to deliver long-term growth and value. The Board of Directors proposed a cash dividend of QAR 2.5 for 2018.”

“Ooredoo Group demonstrated its resilience in a rapidly evolving and increasingly competitive telecommunications landscape. We defended our traditional sources of revenue while developing new income streams to ensure long term value generation for our shareholders. Group revenue was QAR 29.9 billion supported by a steady performance in our home market of Qatar, as well as in Oman and Kuwait. At a group level our results were impacted by regulatory shifts in Indonesia and currency fluctuations in Tunisia and Algeria. Ooredoo Group delivered a Net Profit of QAR 1.6 billion and a solid EBITDA margin of 41%, supported by cost optimisation initiatives across all our operations.

Ooredoo Qatar is the leading telecommunications provider in the country, and in spite of operating in a highly penetrated and mature market, we increased our EBITDA by 2%, compared to the same period last year. In Kuwait we increased our revenues by 9% driven by customer additions and an increase in handset sales. Ooredoo Myanmar’s EBITDA surged 29% and our customer base there grew by 21% as we tailored our strategy to serve both urban and rural populations. Ooredoo Algeria maintained its mobile data leadership though network expansion. Asiacell Iraq benefitted from the stabilisation of market conditions and reported a 6% increase in EBITDA year-on-year. Ooredoo Tunisia reported a strong set of results, revenues were up by 9% and EBITDA grew 7% in local currency terms.

In Indonesia, we are beginning to witness a positive shift in market dynamics, with reduced churn rates and better customer loyalty. We reported two consecutive quarters of revenue growth, and put into place a strong strategy to capture further growth in the new market environment.”

Ooredoo Qatar delivered a steady performance in 2018, building on its market leadership and network expertise to take the lead in the global race to provide 5G services, as well as enhancing its business solutions portfolio and the customer experience.

Ooredoo Qatar’s drive to be a leader in 5G services continued, with 90 5G sites live across the country by year-end and the company being assigned 5G spectrum for commercial use by the regulator. The roll-out of Ooredoo Fibre saw ongoing success, with 405,000 homes connected to the service by year-end. In addition, the company’s digital entertainment service, Ooredoo tv, grew its customer base significantly, registering 14% year-on-year growth.

Ooredoo Oman posted a robust set financial results, with growth across the board. Revenues increased by 1% to QAR 2.7 billion in 2018, driven by growth in fixed line and a strong performance of the mobile and wholesale divisions. EBITDA increased 2% to QAR 1.5 billion, and EBITDA margin was strong at 54%.

Ooredoo Oman’s customer base reached 3.0 million in 2018. Customers benefited from the launch of the country’s first in-app prepaid offering “New Shababiah,” empowering customers to address all their connectivity needs digitally, including the purchase and delivery of SIM cards. Beyond the consumer segment, Ooredoo Oman has retained its position as Oman’s digital partner of choice, with several contracts signed in 2018 to supply smart city solutions and digital services, including signing an agreement with the National Electricity Centre (NEC) to build a state-of-the-art Internet of Things network system.

Ooredoo Kuwait reported a strong revenue increase of 9% to QAR 2.9 billion, supported by growth in device sales, to promote growth in a highly penetrated telecommunications market. EBITDA was QAR 662 million, up 2% compared to 2017, whereas EBITDA margin was down 1 percentage point compared to 2017, due to higher handset sales.

Ooredoo Kuwait continued to invest in enhancing digital channels, including its mobile app and self-service kiosks, creating a convenient and flexible user experience. This strategy resulted in a significant improvement in the company’s overall customer satisfaction score and contributed towards the 4% growth in customer base achieved during the year.

Asiacell Iraq benefitted from improvements in the security and economic situation in the country paving the way for network expansion and reconnections. Asiacell’s revenue was stable at QAR 4.4 billion, compared to QAR 4.5 billion in 2017. EBITDA was up 6% to QAR 2.1 billion for 2018, reflecting better cost efficiencies by the management.

Customer base increased 10% to 14.2 million customers in 2018 period. Asiacell Iraq also launched its B2B line offering a range of services to address the needs of Iraq’s business community and create a new revenue stream.

The telecommunications market in Algeria was impacted by weak economic conditions and increased competition driving down revenue. This is compounded by depreciation of Algerian Dinar by 5% year on year. As a result Revenue decreased to QAR 2.8 billion, compared to QAR 3.4 billion in 2017. EBITDA was QAR 1.0 billion, down from QAR 1.5 billion in the previous year. Customer numbers declined by 3% to 13.9 million in 2018.

Despite a challenging market, Ooredoo Tunisia reported a strong set of results, revenues were up by 9% and EBITDA grew 7% in local currency terms. Growth was driven by an 8% increase in the subscriber base resulting in gains in data revenues and an increase in enterprise revenues. Performance in Qatari Riyals was impacted by currency depreciation of 9% year on year, with revenue at QAR 1.5 billion and EBITDA at QAR 595 million.

Ooredoo Tunisia confirmed its position as the Number 1 customer market share telecom player by providing high quality services and innovative products such as ‘Tedallel,’ a multi-platform offering providing users with the flexibility to choose between voice, data or value-added services such as music, video and gaming.

Indosat Ooredoo’s performance was impacted by the new government regulation around SIM card registrations, which was introduced in the fourth quarter of 2017, changing the market dynamics in the country. Revenues reached QAR 5.9 billion and EBITDA stood at QAR 2.0 billion (2017: QAR 8.1 billion and QAR 3.7 billion respectively). Quarter on quarter, the company saw revenue growth of 11% driven by growth in the consumer segment as well as the enterprise segment. A clear indication that the company has taken the right steps to manage the transition to a new market environment.

Indosat Ooredoo implemented a new multi-faceted strategy that focuses on long term growth. The strategy includes increased investment in network roll out especially outside of Java, a shift away from a push to a pull go-to-market strategy, cost discipline and continuing to offer good value, transparent products at an affordable price. Indosat Ooredoo’s 4G network now covers 80% of the population and 4G plus was launched in the 4th province (North Sumatra).

Ooredoo Myanmar reported another strong set of results with EBITDA up 29% to QAR 197 million in 2018 compared to QAR 152 million in 2017, demonstrating the success the company’s efficiency programme. Revenues were down 5% to QAR 1.3 billion in 2018, impacted by the depreciation of the Myanmar Kyat, 5% year on year as well as the launch of an additional telcom operator. In local currency terms revenue was stable compared to 2017.

Ooredoo Myanmar increased its customer base by 21% to 9.6 million customers as it continues to serve Myanmar’s urban and rural populations.  Its 4G network leads the market and now serves 300 townships covering more than 54% of the country’s population with Ookla recognizing the service as the fastest 4G network in the country. 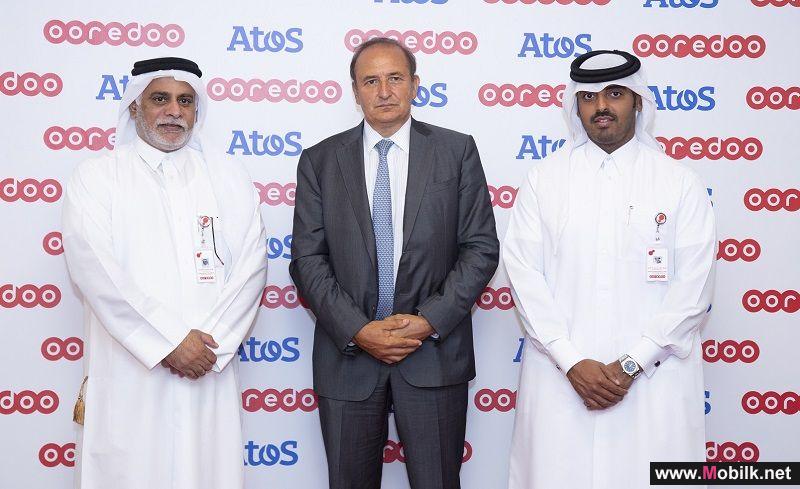 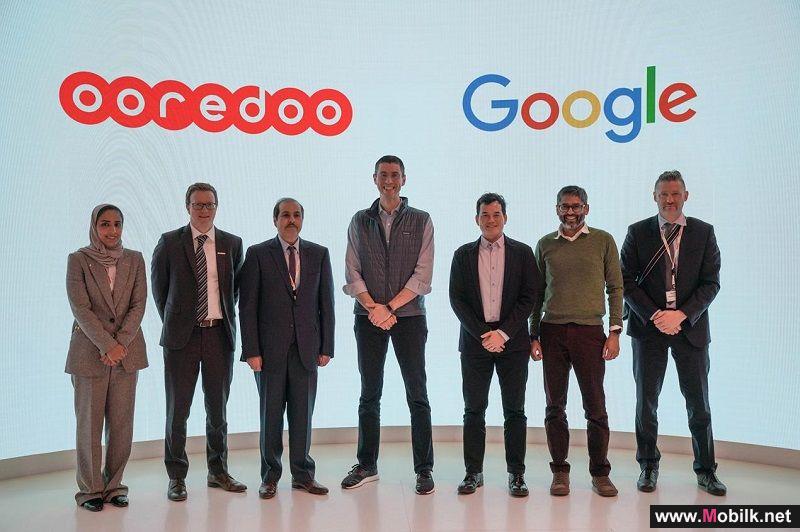 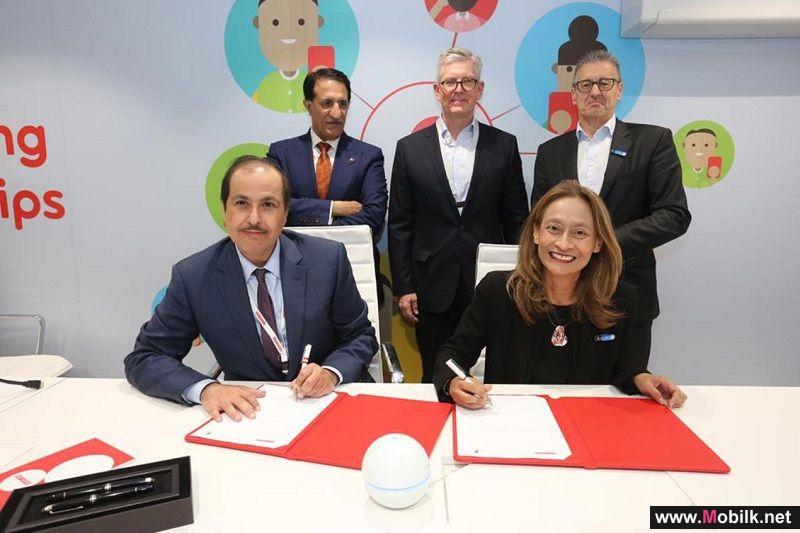 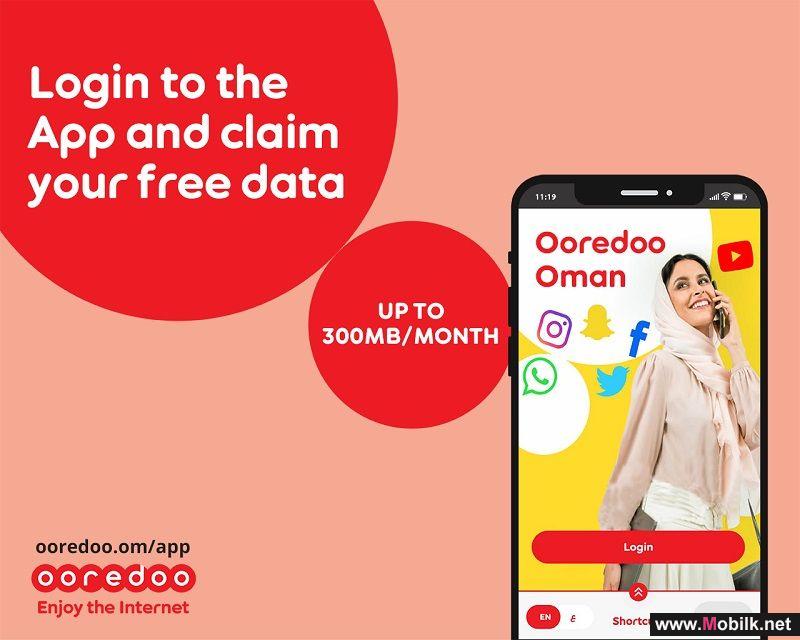 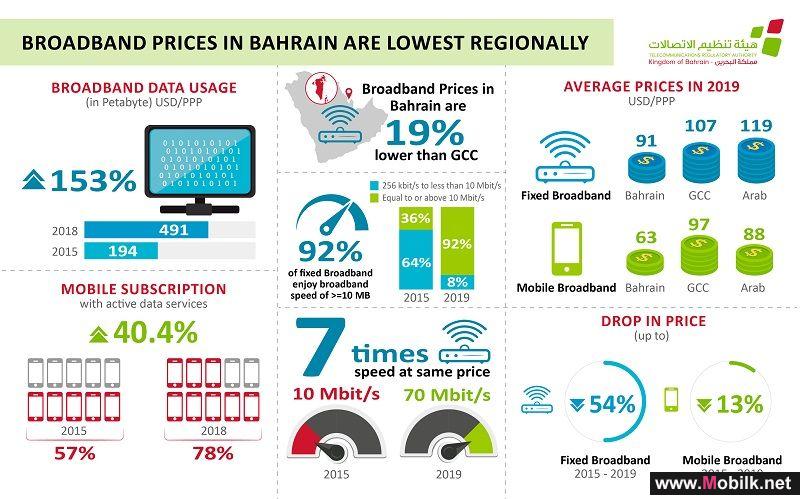 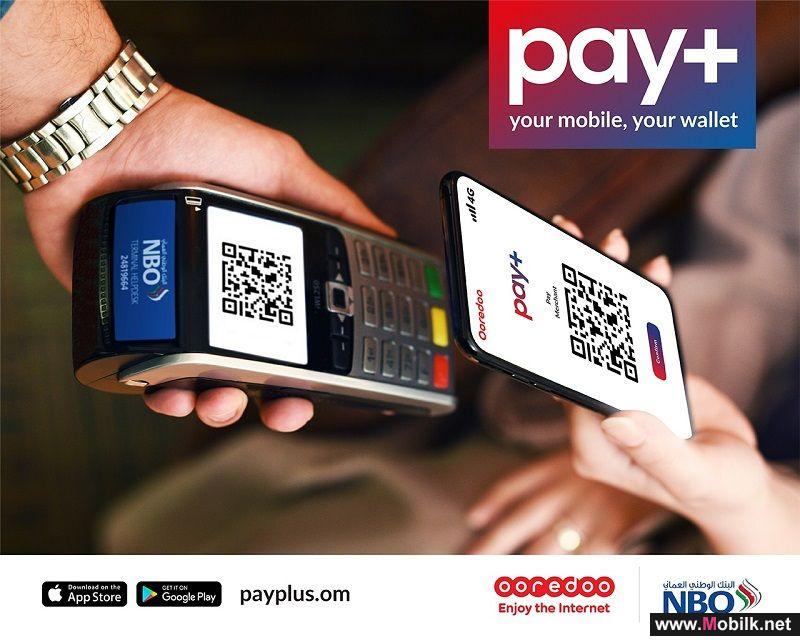 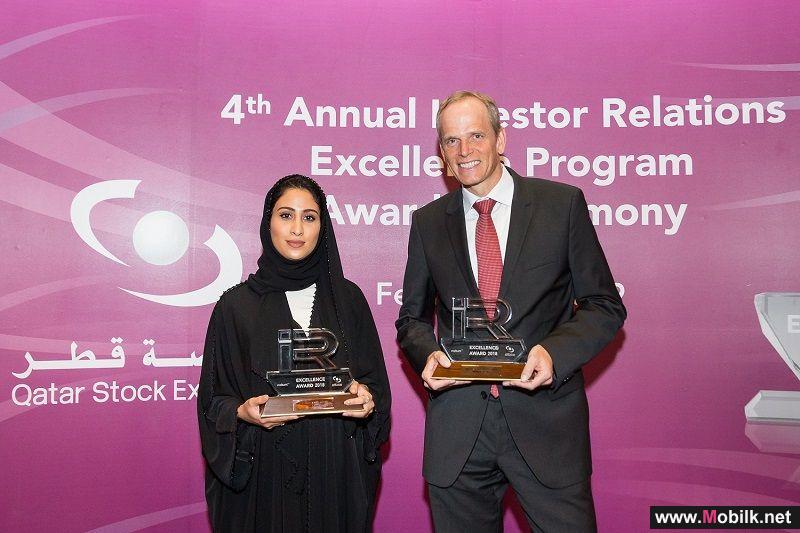 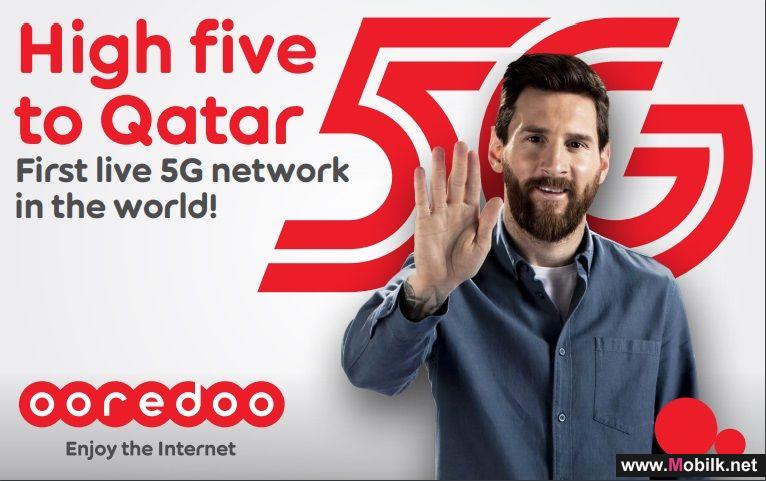 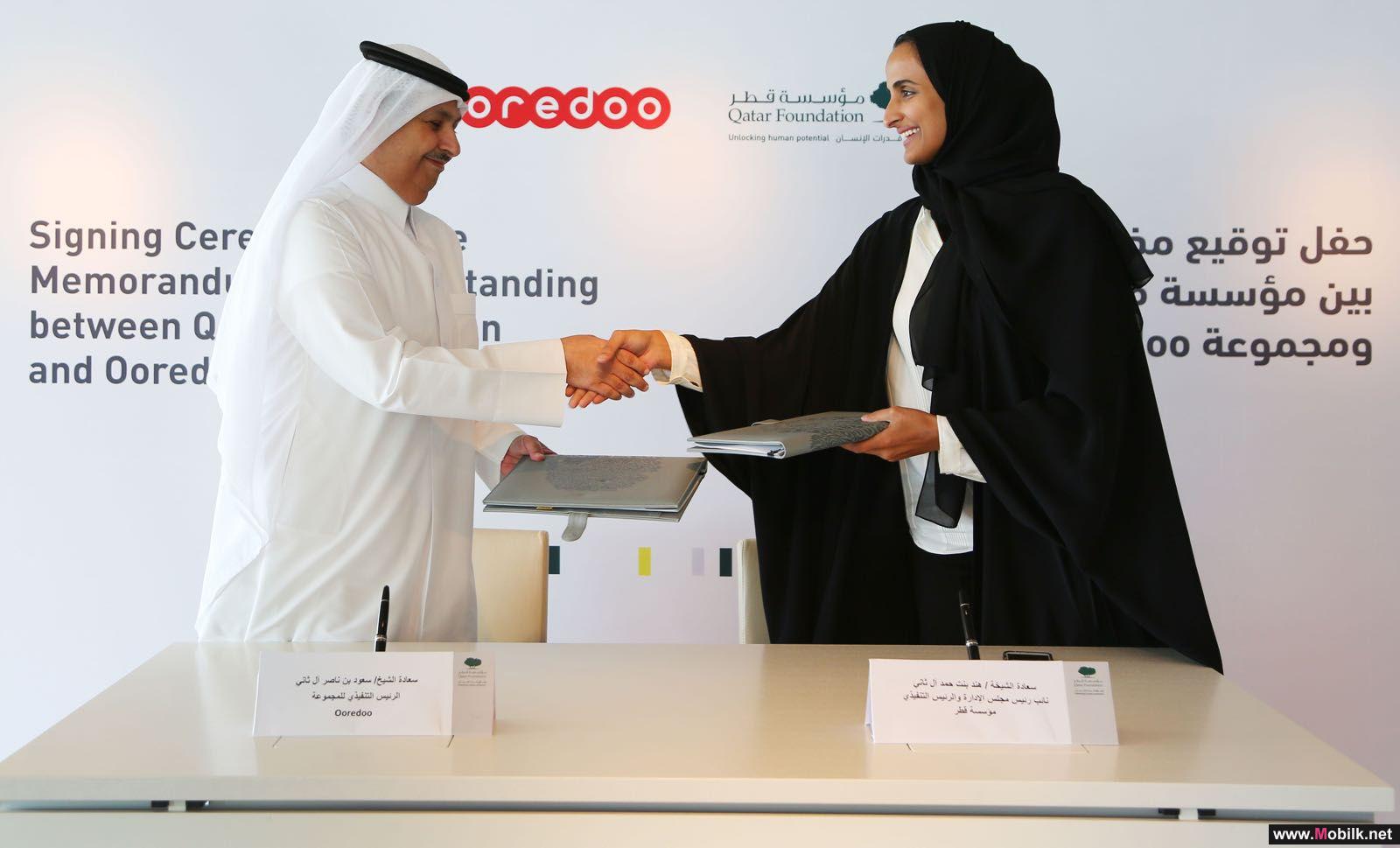