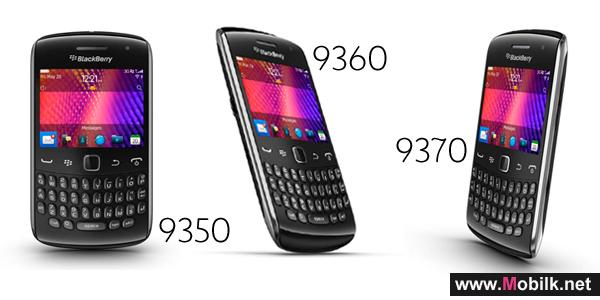 These new models are designed to address a large and important segment of the global mobile phone market where customers are looking to upgrade their existing feature phone or existing BlackBerry Curve with an affordable, easy-to-use, full-featured and socially-connected smartphone.

“These new models will build on the incredible success of the BlackBerry Curve line and further expand the largest global launch of BlackBerry smartphones in our history,” said Mike Lazaridis, President and Co-CEO at Research In Motion. “The new BlackBerry Curve smartphones are absolutely stunning and offer a significant performance upgrade with an unmatched mobile social experience for the millions of feature phone users in the market as well as our existing Curve customers.”

The new BlackBerry Curve smartphones are slim, stylish and simply beautiful. They are ergonomically designed with a comfortable and iconic keyboard for fast, accurate typing and an optical trackpad for easy, one-handed navigation. GPS and Wi-Fi® support are also included, as well as a 5MP camera with flash and video recording so that memories can be captured and instantly shared on social networks. The microSD/SDHC slot supports up to 32 GB memory cards for additional media storage.

In addition to supporting the new BlackBerry 7 OS, the new BlackBerry Curve smartphones feature a range of powerful hardware enhancements including upgraded processors, displays and memory, and built-in support for NFC (Near Field Communications), a new technology that is enabling many exciting capabilities, including the ability to pair accessories or read SmartPoster tags with a simple tap of the smartphone.

BlackBerry 7 introduces a next generation BlackBerry browser which combines the dramatically improved performance of the advanced WebKit browser engine with the hardware enhancements in the new BlackBerry Curve smartphones to deliver a significantly faster, more fluid web browsing experience. Additional enhancements to this next generation BlackBerry browser have also enabled smoother navigation and optimized HTML5 performance for incredible gaming and video experiences.

BlackBerry 7 OS also includes a number of other pre-loaded applications and integrated functionality for increased productivity and collaboration right out of the box. The Premium version of Documents To Go is included free of charge, offering users powerful document editing features as well as a native PDF document viewer. BlackBerry® Protect is also pre-loaded*, offering customers the peace of mind that personal data can be backed up and secured in the cloud. With BlackBerry Protect, users can locate their misplaced BlackBerry smartphone using GPS or remotely turn up the ringer for an audible notification if their handset is close-by. BlackBerry® Balance (announced May 2, 2011) is integrated in BlackBerry 7, allowing users to enjoy the full BlackBerry smartphone experience for both work and personal purposes without compromising the IT department’s need for advanced security and IT controls. The popular universal search capability has also been enhanced with support for voice-activated search, so users can now simply speak to begin searching their device and the web for information.

The next generation BlackBerry Curve smartphones deliver the world’s best mobile communications and social experiences with a highly refined and integrated suite of phone, email, messaging and social apps to keep users connected and productive throughout the day.

The latest release of BBM™ (BlackBerry® Messenger) is pre-loaded and now extends the real time BBM experience to a range of other apps, such as Foursquare, allowing users to easily interact with each other from within the ‘BBM connected’ app (see separate announcement on July 28, 2011).

The updated Social Feeds (2.0) app has been extended to capture updates from media, podcasts, and favorites all in one consolidated view. The new Facebook® for BlackBerry smartphones (2.0) app introduces features like Facebook chat and BBM integration that makes it easier for users to connect with their Facebook friends in real time utilizing push notifications. Twitter for BlackBerry smartphones also delivers a deeply integrated experience including use of real time push notifications and Social Feeds integration.

The BlackBerry Curve 9350, 9360 and 9370 smartphones are expected to be available from carriers in Canada this month and from other carriers around the world beginning in September. Availability dates and pricing for specific devices from specific carriers will be announced in conjunction with RIM’s partners.