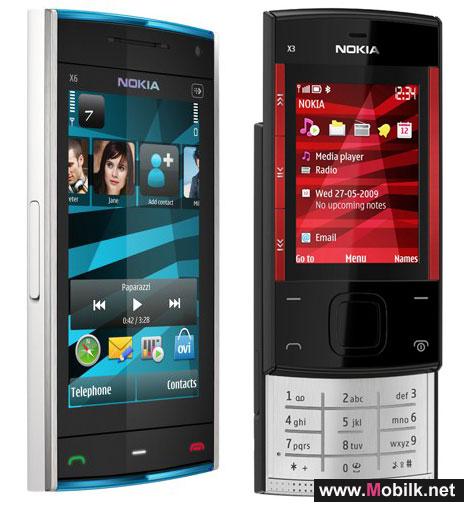 Nokia World has kicked off today in Stuttgart, Germany with announcements including the latest X6 and X3 Comes With Music devices (pictured).

The new X6 touchscreen Comes with Music device has 32GB of inbuilt memory and is capable of playing up to 35 hours of music. Both the X6 and the X3 are connected to the Ovi Store, while the X3 is the first Series 40-powered device to do this.

The X6 has a 3.2 inch that allows a user to fit images of up to 20 social network friends on the homescreen. It also houses a five-megapixel camera with Carl Zeiss optics and dual LED flash, TV-out, video editing, A-GPS, Ovi Maps and Playlist DJ. Games such as Spore, DJ Mix Tour and Asphalt4 are also included.

The Nokia X3 slider features a 3.2-megapixel camera and 2.2 inch screen as well as dedicated music keys and support for up to 16GB of storage via microSD card.

Nokia vice president Jo Harlow said: "The Nokia X6 and Comes With Music is a powerful combination, enabling music fans to download all the music they could ever want - quickly, easily and for free.

"We're giving people convenient access to and ownership of a vast music library and an exciting new touchscreen device to play their music on."

Nokia also recently announced the new 5230 and 5800 Navigation Edition. The 5230 touchscreen device features A-GPS, Ovi Maps and a two-megapixel camera. It will ship in Q4. Pricing is to be confirmed.

The 5800 Navigation Edition is preloaded with voice guided drive and walk navigation and lifetime subscription to the service for the user's region. It will ship this quarter priced at around €285 (£250.72).