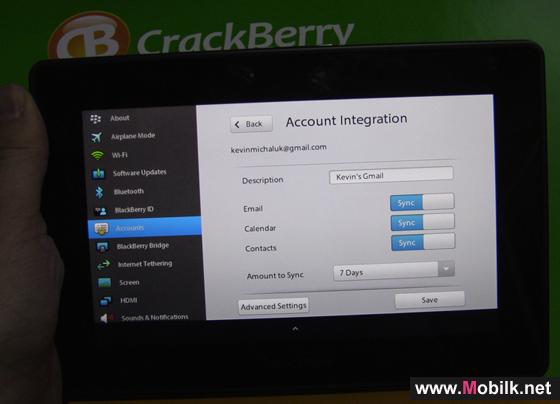 Mobilk - This week at the Consumer Electronics Show (CES), Research In Motion (RIM) (NASDAQ: RIMM; TSX: RIM) will be previewing new features of BlackBerry® PlayBook™ OS 2.0 that will enable customers to stay even more connected and productive in their personal and professional lives.

“BlackBerry PlayBook is already recognized for delivering powerful performance, true multi-tasking, advanced web browsing and HD multimedia in an ultra-portable design,” said Mike Lazaridis, President and Co-CEO at Research In Motion. “With BlackBerry PlayBook OS 2.0 we are building on this strong foundation, as well as leveraging our strengths in communications, social integration and productivity, to allow people to use their BlackBerry PlayBook in new ways throughout the day.”

CES 2012 attendees who visit the BlackBerry booth at CES (South Hall 3 Booth # 30326) will get a sneak peek of upcoming BlackBerry PlayBook OS 2.0 functionality including:

• New unified inbox - a powerful unified inbox within the built-in messaging app allows users to quickly manage their personal email and work email accounts as well as the messaging capabilities of popular social networking sites like Twitter®, LinkedIn® and others – all in one place.

• Multi-tasking within email – by extending the BlackBerry PlayBook tablet’s multitasking capabilities to ‘tabbed email’, users are able to reference one email while they compose another.

• Rich-text email composing and editing – new features within the Messages app enable users to benefit from full support of fonts, formatting and editing of email threads, offering a robust email experience similar to that of a PC or laptop.

• Inbox management tools – allows for powerful inbox search across multiple email accounts, as well as the ability to set out-of-office messages and email signatures directly from their tablet.

• Innovative people-centric calendar – in addition to standard calendar features that help users plan and organize their day, the powerful built-in Calendar app provides the unique ability for users to view their calendar by who they are meeting with that day and review valuable information about that contact. Information is consolidated automatically from social networking sites about that contact and/or their company.

• Relationship-centric contacts app - more than just an address book, the new built-in Contacts app serves as a social hub - merging and consolidating information from multiple sources (including email and social channels) into one contact file for each person in their address book.  Each contact file includes information such as recent status updates, conversations, related news articles and mutual contacts that are kept up-to-date automatically.

Making Your BlackBerry Smartphone and Tablet a Powerful Pair:

• Updated document editing capabilities - updated Documents To Go® functionality makes it easier for users to create and edit documents while on the go. Improvements include: enhanced support for the virtual keyboard, the ability to view and update embedded charts and chart sheets within spreadsheets, a new formula wizard with over 100 functions as well as the ability to edit presentations including text, bullets and formatting.

• Print To Go application - this app allows users to wirelessly “print” from their laptop or PC directly to their BlackBerry PlayBook over Wi-Fi®. A digital printout is created on the BlackBerry PlayBook so that users can view, sort and manage their digital printouts as though they were physical sheets of paper. The Print To Go app is the perfect way to consolidate info from various related sources like a hotel web confirmation, an airline boarding pass email, the show event schedule or even a map of the destination city and make them available for quick access on the go.

• Increased control and manageability of corporate data – the combination of BlackBerry PlayBook OS 2.0 with BlackBerry Mobile Fusion and BlackBerry Balance will help to overcome many barriers to widespread tablet deployment, including device manageability and the ability to secure, manage and control confidential corporate information on the device. Plus BlackBerry PlayBook OS 2.0 supports dedicated shelf space inside the BlackBerry® App World™ storefront to allow IT departments to control distribution of enterprise applications and to make those approved enterprise applications easily available to the organization’s end users.

• Video store – a catalog of thousands of movies and TV shows will be available through the integrated BlackBerry Video Storefront* with new releases to be made available for purchase or rent the same day they come out on DVD. Users will be able to begin watching media as soon as they start to download the file, so users won’t have to wait for the entire file to transfer before they can enjoy great entertainment on the tablet’s high resolution display, or on an HDTV via the BlackBerry PlayBook tablet’s HDMI output.

• Enhanced web browsing - the BlackBerry PlayBook OS 2.0 browser also includes a new reading view, which is designed to make web sites even easier to enjoy by eliminating page clutter at the touch of a button. What’s left is a cleaner format that is great for reading online news articles, blog posts, or websites that contain heavy amounts of text.

* BlackBerry Video Store will initially be available in the United States. Support for other countries is expected to be added later this year.