Motorola ATRIX™ is gaining a reputation as the go-to entertainment device for Middle Eastern smartphone aficionados since its UAE launch in July.

Featuring a hefty 48GB of storage (16GB internal and optional 32GB MicroSD card) and fuelled by a powerful dual-core processor, Motorola ATRIX is resolutely built for fun - so much so that it has become many Middle Eastern users’ primary digital hub.

While loaded with all the full-throttle technical specs needed to get the most out of the mobile multiverse on the go, Motorola ATRIX truly starts to stand out from the crowd by ruling entertainment roost at home as well.

This is where the Motorola HD Multimedia Dock comes in.

By docking the smartphone into the revolutionary accessory, users can upscale the size of their entertainment needs by connecting to HDMI-compatible televisions and home theater audio systems for a peerless video, music and gaming experience. With three USB ports and an HDMI port, the smartphone can also be used for desktop tasks by hooking up with an HDMI-compatible monitor, keyboard, mouse and speakers. The Motorola HD Multimedia Dock is available with Motorola ATRIX as a part of a Home Entertainment package.

Motorola ATRIX also serves as a high-performing conduit for online entertainment thanks to another groundbreaking accessory – the Motorola Lapdock™.  Users simply dock their Motorola ATRIX into the back of the Lapdock and their device becomes a laptop with an 11.6-inch screen, an Adobe® Flash® Player-supporting Mozilla Firefox 3.6 browser, a full keyboard, stereo speakers, and a 36Wh three-cell battery that delivers up to eight hours of running time.

“Motorola ATRIX provides a stunning digital entertainment experience, going above and beyond the typical smartphone functionality to transform into a home entertainment system and a desktop capable of delivering a PC-like experience,” said Raed Hafez, General Manager for Motorola Mobility, Middle East & Africa.

“We are delighted that users in the region are responding to the power and versatility of Motorola ATRIX and embracing it as a formidable entertainment portal both inside and outside the home.” 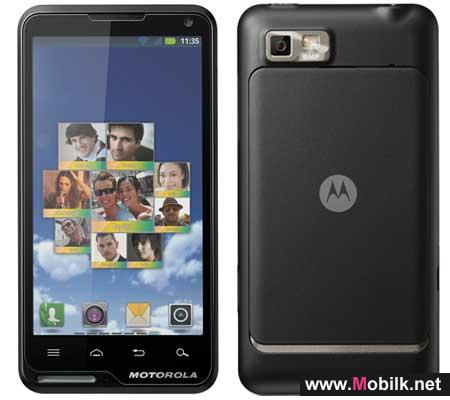 Motorola Mobility’s MOTOLUXE™ Smartphone to Launch in the UAE..

Calling all UAE style gurus! Get ready to flaunt your fashion flair with the ultra-vogue, rail-thin MOTOLUXE™ from Motorola Mobility, available now in the UAE...