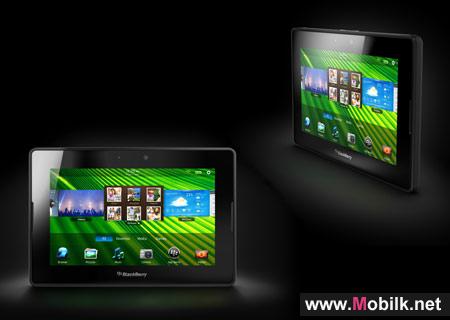 Mobilk - Research In Motion (RIM) (NASDAQ: RIMM; TSX: RIM) announced that the new BlackBerry® PlayBook™ OS 2.0 will be released for download today. BlackBerry PlayBook OS 2.0 delivers an enhanced tablet experience and allows you to use the BlackBerry PlayBook in new ways throughout the day - at work and at play.

•Integrated email client with a powerful unified inbox: With BlackBerry PlayBook OS 2.0 you have the option to use a  unified inbox that consolidates all messages in one place, including messages from Facebook®, LinkedIn® and Twitter®, as well as personal and work email accounts.

•Social Integration with Calendar and Contacts apps:  The built-in calendar harnesses information from social networks and makes it available where and when users need it.  Contact cards are also dynamically populated with updated information from Facebook, Twitter, and LinkedIn to create a consolidated view of contacts.

•Improved mobile productivity: Updated document editing functions, the new Print To Go app, and increased control and manageability of corporate data with BlackBerry® Balance ™ allow you to get more out of your BlackBerry PlayBook every day. Plus, an updated virtual keyboard with auto correction and predictive next word completion learns how you type to enable faster, more accurate typing.

•New apps and content: Thousands of new apps are being added to BlackBerry App World™ today (including a range of Android® apps that will run on the BlackBerry PlayBook). A new BlackBerry Video Store1 is launching today. Enhanced web browsing capabilities are also available with BlackBerry PlayBook OS 2.0.

•BlackBerry PlayBook OS 2.0 - How to Video

1) BlackBerry Video Store will initially be available in the United States. Support for other countries is expected to be added later this year.