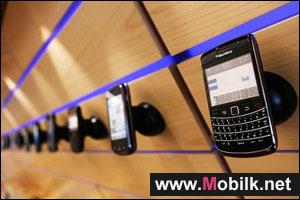 In fact, there is still room to grow as the region accounts for one out of every 12 smartphones sold compared to one in five units globally during the fourth quarter.

The number of mobile handsets sold in the region in the fourth quarter totalled 39.89 million against 36.29 million during the same period in 2009, registering a growth of 9.92 per cent.

Although the top two handset vendors continued to be NokiaNokiaLoading... and Samsung, the former saw its share drop a percentage point during each quarter.

Alcatel, which re-entered the market in the third quarter, returned to a spot in the Top Five with a share of 2.9 per cent raised it to 4.7 per cent in the fourth quarter.

In addition to smartphones, increased sales of white-box products was another major driver of growth. Populated by names such as Tecno, Smart, Smadle, G-tide and Sando, they have a big presence in the African markets.

Together, they accounted for 2.5 million units and a 6.26 per cent market share during the fourth quarter, though less than what they had in the third. Around 16 million white boxes were sold last year in these markets.

You need to carry more articles this market research. I have seen him (Naushad)...

by Nafjad mansour
More Comments by the Community

In terms of operating systems, Symbain still rules with an 80.6 per cent share, though it has been trimmed slightly.

The BlackBerry maker RIM also gained marketshare to 4.6 per cent compared with the 3.1 per cent it had in the fourth quarter of 2009. Its principal rival, Apple, took on a 6.2 per cent slice of the market, against 3.8 per cent from a year ago.

“Android’s rise has been very dramatic in the last two to three quarters and in this quarter [the fourth] grew 3,676 per cent year-on-year followed by Apple with 126 per cent and RIM with 115 per cent,” said Annette Zimmermann, senior research analyst at Gartner for mobile devices technology and service provider research, told Gulf News.

Microsoft’s Windows 7 is losing out — in the fourth quarter it dipped to 1.3 per cent from 5.7 per cent over the 12-month timeframe.

In the applications space, Apple maintained its traditional dominance. Yet, according to Jack Kent, analyst for mobile media, IHS Screen Digest research, “Competitors managed to close the gap with Apple’s iPhone in terms of providing smartphone products with compelling user interfaces last year.”

Google’s Android Market made the most dramatic advance, with revenues soaring 861.5 per cent for the year.

This allowed it to take out a 4.7 per cent share of the revenues in global mobile applications revenue, up from 1.3 percent in 2009. The company came within a breath of displacing Nokia’s Ovi Store to take the third spot.

As competitors refine their apps stores, they will continue to eat into Apple, Kent said. However, Apple is expected retain more than half of the market revenues at least through 2014.

“Android app store in not available in many of the markets in MEA,” Zimmermann said. “Customers want more regional content on Android, so vendors are trying to push more of it.”

In the mobile telephony space, this could well be a watershed year following the NokiaNokiaLoading...-Microsoft tie-up.

One of the key differentiators in the operating system wars is the size of the developer community the competing parties attract and the corresponding apps they produce.

The deal provides Microsoft with a Tier One handset manufacturer providing validity to its solution and an installed base among potential developers.

“It is a good chance for them to become No 3 in the operating system,” said Annette Zimmermann at Gartner. “NokiaNokiaLoading... has said they are going to abandon Symbian in 2012.

“This year we can see a fall in Symbian growth despite NokiaNokiaLoading... being a big player in the region.”

She said Windows 7 has not picked up dramatically in the Middle East and Africa. “Nokia’s navigation and location-based services are very much in demand; Microsoft has to differentiate their way to keep going,” she added.

According to Young Woo-jun, Head of Telecommunications at Samsung Gulf Electronics, Samsung has a responsibility to satisfy every customer’s needs and actively respond to the demands of the smart phone market. To follow trends and meet market needs, we are targeting continuous growth in the smart phone business based on our multi-platform strategy.

“We still have to see what the strategy will be like. Microsoft will be investing more resources in Windows 7 project.”

The MeeGo is also going to be discounted. NokiaNokiaLoading... will be launching only one model this year.

“Apart from that they haven’t announced any tablet strategy,” said Annette. “Another question is what will happen to HTC and Samsung, both having announced they will be launching phones with Windows 7. They may be alienated and might not be willing to work with Microsoft.”

Android’s rise has been very dramatic in the last two to three quarters and in this quarter [the fourth] grew 3,676 per cent year-on-year followed by Apple with 126 per cent and RIM with 115 per cent.